If you had to choose one event that epitomizes your experience as a teenager, what would it be? For me, I immediately think of that moment at the school dance while I was dancing with my middle school crush to November Rain by Guns n Roses. Our slow dancing skills were passable during the first part of the song, but then the tempo picked up … and let’s just say, we were not very smooth at adapting our dancing styles. Although I hope (for your sake) that the same thing didn’t happen to you, I’d bet that whatever memory you do conjure when you think back to your own adolescence is socially and emotionally charged.

It turns out that my adolescent experiences were completely typical of most adolescents—social experiences take on heightened emotional and motivational importance during adolescence as compared to other stages of life. In a study we conducted, we wanted to see how sensitive adolescents were to even the simplest, most innocuous social provocation: being looked at by a peer. During our study, we measured brain activity with functional magnetic resonance imaging in tandem with physiological arousal (measured with the skin conductance response—how much sweat is secreted on the skin during emotional events). We observed that even the simple act of being looked at by a peer was enough to induce heightened emotion reports, physiological responses, and brain activity in adolescents (when compared to adults and younger children). For instance, we saw biased activity in regions of the brain important for representing the emotional value of stimuli and in brain regions involved in thinking about ourselves (to read more, see here). All of these findings add up to the general conclusion that adolescents are highly attuned and reactive to their social environments – even very subtle ones – and that this fact influences a variety of their daily choices and feelings. 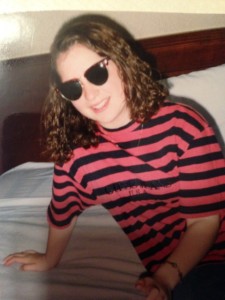 The author of this post at age 13 showing off her spiral perm.

What’s interesting about these findings is that they seem not to be unique to human adolescents. The term ‘adolescence’ is a sociocultural construct that refers only to humans, defined by simultaneous physical and psychological change that ends when an individual takes on adult roles in society (adolescence is most often defined as the approximate ages ~13-17 years). However, some aspects of biological changes during this age range, including hormone changes that define puberty, occur in other mammals as well. Some surprising results have arisen from the study of pubertal-linked changes in social behavior in non-human mammals. Pubertal rats enjoy ‘social play’ (kind of like wrestling) more frequently than adult rodents, and also seek out more novel and potentially thrilling experiences. Perhaps most intriguingly, rodents undergoing puberty also approach potential rewards (in this case, consuming alcoholic beverages) more when in social groups. Whereas adult mice spent the same amount of time consuming alcoholic substances when alone and with peer animals, juvenile animals in the pubertal stage spent more time consuming alcohol when in a cage with familiar peer animals. And it wasn’t just a motivation to consume the tasty cocktail before others got to it – they each had their own sipper.

What lessons can we learn from our furry friends about adolescence and the social potency that characterizes this age range? It is often assumed that peers take on heightened importance in adolescence due to overt concern about social status. However, it seems unlikely that such complicated, strategic motivations would drive rodents to behave differently around peers. This raises a second possibility, that there are “undercover” or non-deliberate ways that adolescents are influenced by social contexts. We believe that adolescents’ brains are biased to assign importance to social information, which imbues social settings with an extra boost in power to shape their feelings, motivations, and decisions. Although more research needs to be done to address questions like “why” and “how”, I guess that’s why I’m still mildly embarrassed by my tragic bout of dancing (and simultaneously thankful I grew up before the days of smartphone cameras).

One thought on “The emotional potency of peers during adolescence”