If you’re  a New Englander, a city-dweller, an introvert, or just put a lot of stock in your mother’s admonitions to avoid talking to strangers, then you’re going to think what I’m about to say is crazy. You should talk to strangers more, and there’s scientific evidence to support it. Now I know what you’re thinking. Small talk is tedious! If you talk to that person on the street, you’ll be stuck there forever. Plus, he’s most likely crazy, going to mug you, or both. Be that as it may, scientific research suggests that it will make you happier to make a connection with other members of humankind. 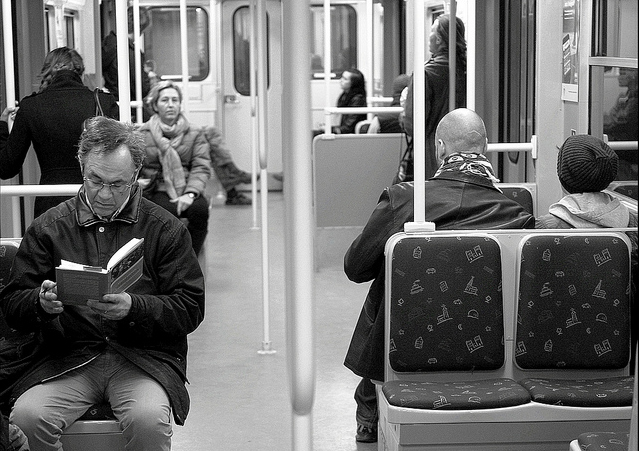 In a newly published paper, Nick Epley and Juliana Schroeder at the University of Chicago asked participants in a Chicago-area train station to do one of three things on their commute: one group was asked to strike up a conversation with the person next to them, one group was asked to do their normal commute routine (which let’s be honest, probably involves ruminating about the coming toils of the day, or what you’re going to make for dinner that night) and one group was asked to sit in solitude. At the end of the train ride, the authors measured how happy the commuters felt. They found that small talk is apparently not so tiresome after all. Participants who chatted with a train-mate reported feeling more positive compared to participants who sat in solitude and participants who did their normal commute thing. Now perhaps what’s most interesting about these findings is precisely what I suggested at the beginning of this post—the idea of chatting with someone sounds, well, at best a little tedious and at worst just downright terrible. As a dyed-in-the-wool New Englander, I can assure you that this is my expectation when the person next to me in the supermarket checkout line starts expounding on the recent weather or extolling the virtues of my choice in yogurt. Epley and Schroeder’s participants also predicted that they’d feel pretty unimpressed at sharing trivial tidbits with another human being on the train. Funnily enough, they also predicted that solitude would be rather blissful. Not so.

These findings are interesting not just because they offer a new tactic for improving your commute, but because they strike at the heart of what social scientists and emotion researchers have known for some time. People need other people. Indeed, social connection is probably one of the most important keys to health and well-being. A famous study by Nobel Laureate Daniel Kahneman found that having intimate relations (with another person) and being with friends makes people happier than almost all other things, including relaxing, eating, exercising, napping, even taking care of their kids (you’ll note that spending time with kids doesn’t quite count as the type of “spending time with people” we’re referring to here—this effect is probably moderated by the dirty diapers, constant feedings, rides to soccer practice and fights amongst siblings that makes interactions with these small people less than blissful). John Cacioppo, also from the University of Chicago, has found that perceived loneliness is related to depression, poor health and even mortality. And what’s lonelier than being surrounded by a sea of people and not making connection with a single one? So find a good joke, start caring about the vagaries of the weather, and reach out and chat with someone.