Every year, as we finish a holiday season filled with festive libations, millions of people vow they’re going to get on the straight and narrow. We vow to get thinner, get healthier, spend less, and organize our lives in the coming year. Yet some estimates suggest that just 8% of us ultimately succeed in enacting these resolutions. The ardent pledges we make on December 31st very quickly recede into the background when the cookies, cigarettes, purchases, and distractions insidiously work their way back into our daily lives on January 1st and thereafter.

You might not be surprised that humans are so supremely terrible at controlling our own behavior–we’ve all experienced those moments when we said we weren’t going to engage in some behavior and then we do it again anyway. The problem is, we engage in those behaviors because they’re linked to rewards (sugar, nicotine, relaxation, fat, shiny new shoes, what have you), and our brains are programmed to want rewards in the here and now. This means that we not only need to pledge to get to the gym more, avoid drinking those extra beers, or incorporate more vegetables into our lives—we also need to enact those goals in daily life when the urge to sit on the couch, reach for a cold one, and order the fries rear their ugly heads. Not surprisingly, research shows that merely having an intention to do better doesn’t often translate into better behavior in the future (in one study, 47% of people who intended to engage in some goal never did). 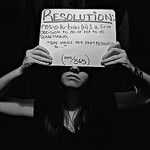 Fortunately, there is hope for all of us who want to change this year. Self-control, or the ability to control your behavior, can be measured as a trait (much like other personality traits such as introversion, extraversion, agreeableness, etc.), and contrary to popular belief, people who enact their New Year’s Resolutions don’t just have Herculean self-control. Rather, people who score high in self-control actually report encountering problematic rewards less in daily life than do people who are low in self-control. This is likely because people high in self control set up their lives in a way that lets them avoid the strong lure of unwanted rewards (the cookies, beers, couches, and new shoes you’ve proclaimed you’ll avoid this year), well in advance of when those rewards are encountered. For instance, someone high in self-control who wants to drop a few pounds might do so by not keeping unhealthy foods in the house in the first place. People high in self-control seem to know that it’s relatively easy to avoid the cookie aisle when in the grocery store, but harder to avoid the cookies when they call from your pantry late at night. People high in self-control rarely find themselves eating a whole box of cookies at night because they’ve ensured that there are no cookies available to be eaten in the first place.

Research has also uncovered other means of helping people enact their goals. My colleague, Paschal Sheeran, is a health psychologist who studies how people’s “implementation intentions” can help them enact their health-related goals (like, eh hem, those goals you made for yourself around 11:59pm on Dec 31st). Implementation intentions involve making a simple “if-then” plan for your future behavior. Rather than just stating a goal, you come up with plans for achieving it that include information on when, where, and how you’ll enact that plan. For instance, rather than forming a general goal such as, “I won’t eat unhealthy foods this year,” you’d form a series of implementation intentions such as, “if they serve pizza at the office lunch, I’ll have only one piece,” or “if I make chicken nuggets for the kids, I’ll make myself a salad,” or “if they serve dessert at the party, I’ll have fruit instead of chocolate cake.” Just like the trick used by individuals high in self-control, the magic ingredient lies in making very specific plans for your behavior well in advance of being faced with a rewarding object. For instance, when staring down that extra slice of pizza at the office lunch, you don’t give the angel and devil sitting on your shoulders the opportunity to duke it out—you just automatically engage in the behavior you planned on—and take only one slice. By contrast, the traditional method of self-control asks you to hem and haw in the moment, trying to figure out a way to steer clear of that delicious, greasy pizza. By that point, the lure of the reward takes over, often even in those with Herculean strength of will. As simple as they seem, research shows that implementation intentions are quite effective—on average, using implementation intentions would make you about 3 times more effective at avoiding that extra slice of pizza.

So rather than just telling yourself that you’re going to lose weight this year, work out more, or make better financial decisions, set up your life in a way that makes it easier for you to avoid undesired rewards and make a set of clear implementation intentions for your behaviors. 2015 might just be the year that you enact your goals!