If you have ever traveled abroad without speaking the language, or encountered someone doing so, you are probably familiar with the difficulty of communicating. In most of these instances, people will still try to get meaning across (and it can sure get weird). Unhelpfully, people will sometimes raise their voice or speak very slowly.  Perhaps more helpfully, people will sometimes attempt non-verbal communication. This might be as simple as a gesture (thumbs-up!), a facial expression (smile) or even a vocalization (laughter). But how much of the original intent actually comes across? People well versed in the ins and outs of “cultural competency” might be aware that overt gestures don’t always carry the same meaning across cultures. For example, a thumbs-up is a positive sign in the United States and parts of Europe, but is an offensive sign in other parts of the world like Iran and countries in West Africa. But might it also be the case that our facial expressions (frowns, scowls, etc.) and vocalizations (sighs, shrieks, etc.) also don’t translate?

The question of how much non-verbal behaviors (such as facial expressions or vocalizations) communicate across cultures has been a topic of scientific interest for many decades. Some researchers have proposed that the nuance of heartache or a deep-seated fear can be communicated non-verbally, regardless of whether the two people share culture or language. This is a universality view of emotion expression and perception, and is based on classic research conducted in the 1960s and 1970s that is taught widely in psychology and beyond. But newer research suggests that Western emotion categories such as anger and fear might not be as biologically basic as was previously thought. This research prompted my colleagues, Lisa Feldman Barrett, Debi Roberson, Marieta van der Vyver, and I to take another look at this question.

The challenge with testing the universality of emotions is that most people in the world are connected now. We are exposed to media from around the globe and there has been a particular proliferation of Western media outward. To be extremely meticulous in testing questions of universality, a small subset of researchers have opted to conduct testing in relatively “remote” societies. So my colleagues and I did just that. We traveled to a remote area of Northwestern Namibia, near the border of Angola to test people from the Himba ethnic group. The Himba are semi-nomadic pastoralists and exist largely outside the political and economic systems of Namibia. Key for us is that most people from the Himba culture are not exposed to other groups. 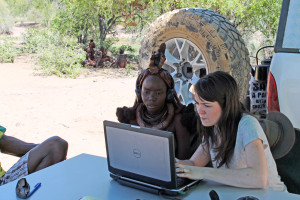 What we wanted to know was simple: Do people from the Himba ethnic group perceive the same emotional message from Western facial expression and vocalizations that people tested in the United States do? What we found is that much of the emotional message is lost across cultures, but not all. Himba perceivers understood whether a Western facial expression or vocalization was signaling a pleasant (happy) or unpleasant (anger, disgust, fear, sadness) state. We also found that Himba perceivers could often understand whether someone was worked up or not (what we call “arousal” in the science of emotion). Himba perceivers tended to see facial expressions in their own unique ways, however. In a task where Himba perceivers were asked to sort pictures of facial expressions into piles by feeling, they tended to group faces into piles that were “behaving” the same way. For example, all the people who appeared to be looking at something were grouped together. Sometimes these people were making a Western expression of fear, but sometimes they were making a different Western expression. When Himba participants were asked to identify the meaning of voices, we found a similar pattern of findings.  The Himba perceived that vocal expressions meant that people were calling out for help, or playing. This research revealed that not only do non-verbal “signals” not have a preserved universal meaning, but the way people make sense of non-verbals varies culturally.  Whereas Himba perceivers were focused on behavior (they think someone is “looking at something”), perceivers from the United States focus on internal emotions (they think someone feels “happy” or “fearful”).

So what are the potential consequences of cultural differences in emotion perception? These findings certainly suggest that we should think twice about “importing” Western non-verbal behaviors into other cultural contexts and assuming they will “work”. While this may seem like a trivial example for those of us who don’t interact with people from a broad array of cultures often, let me remind you why this matters. To do that, I’ll leave you with this. The psychologist Triandis speculated that the start the gulf war was likely based on cultural misunderstanding of emotion, succinctly described below by Carnevale & Choi:

“In January 1991, James Baker, then the United States Secretary of State, met with Tariq Aziz, the foreign minister of Iraq. They met in an effort to reach an agreement that would prevent a war. Also present in the room was the half-brother of Saddam Hussein, whose role included frequent calls to Hussein with updates on the talks. Baker stated, in his standard calm manner, that the US would attack if Iraq did not move out of Kuwait. Hussein’s half-brother heard these words and reported that `the Americans will not attack. They are weak. They are calm. They are not angry. They are only talking.’ Six days later Iraq saw Desert Storm and the loss of about 175,000 of their citizens.”

How we perceive emotions in others could be the difference between peace and war.